The first day of the new year was our last day in Ethiopia.

We headed back to Asimba Guest House (where Chris, the proper British gentleman, is the owner) after spending the previous night in a different hotel. Chris picked us up and while we were waiting for our room to be ready we were seated down to the traditional Ethiopian coffee setup, replete with incense, some kind of leaves on the ground, a low wooden table, and many coffee cups. The whole experience was excellent, yet the coffee wasn't too much to write about. 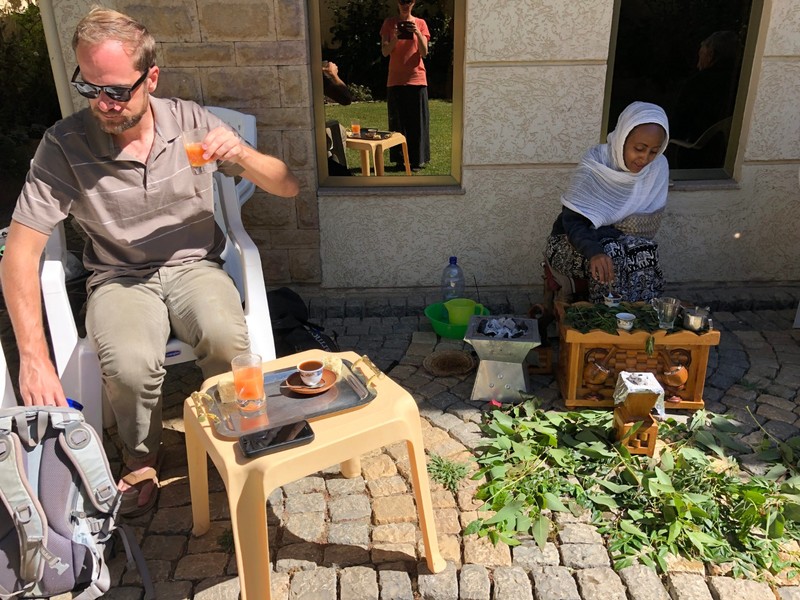 After days of walking on burning gases, lava rock, sand, and — let’s be honest — human, camel and donkey excrement, our shoes were in need of a shine. We headed downtown and stopped at the first shoe cleaner we found. He looked about 15 years old. He didn’t speak English, so I couldn’t ask. But boy, this kid could clean shoes. We sat on his bench in the sun and watched as he meticulously brushed, scrubbed, and wiped our shoes until they looked new. After witnessing his talent, we decided to give him more shoes to clean. I took off the pair I was wearing so they could have a turn. He ended up cleaning four pairs of our shoes. He started by stripping all the shoes of their laces and cleaning those. He stood over the gutter and squeezed the dirty water out of the ball of laces. It took about eight rounds before the water began to run clear. One by one, he strung the laces on a bush in the sun to dry while he proceeded to the shoes. He took out the insoles, flipped each shoe upside down, put his hand inside and slowly spun each shoe around, thoroughly brushing the dust off with a large brush. Next he used a small brush with soap and water to scrub each one. After that he used a cloth to wipe them. He had another special brush that he used on the rubber parts of the shoes, making the rubber look darker and smooth. When he finished that process for each of the eight individual shoes, he laced them back up with ease. I probably would’ve mixed up which pair of laces belonged to which pair of shoes, or put them back on wrong, but this guy knew exactly what to do. And he did it all for a couple bucks. A tip is not expected, but we felt he deserved one. 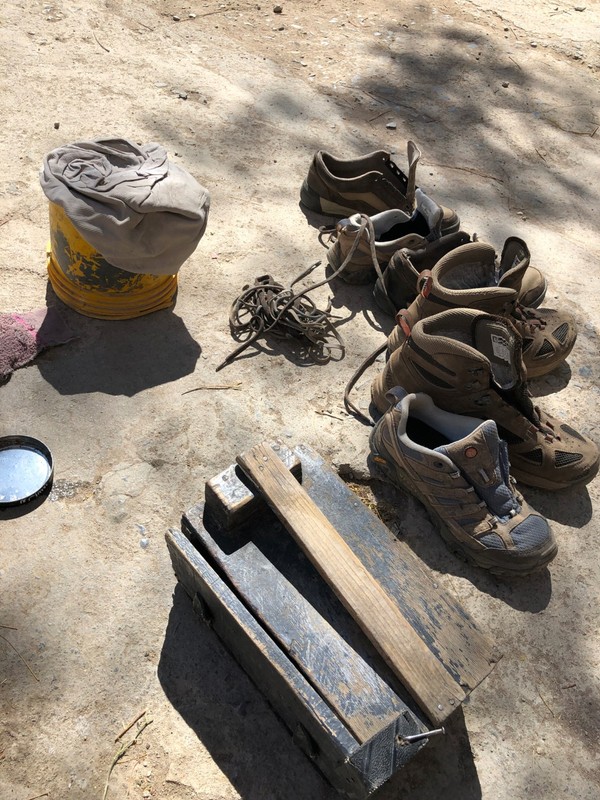 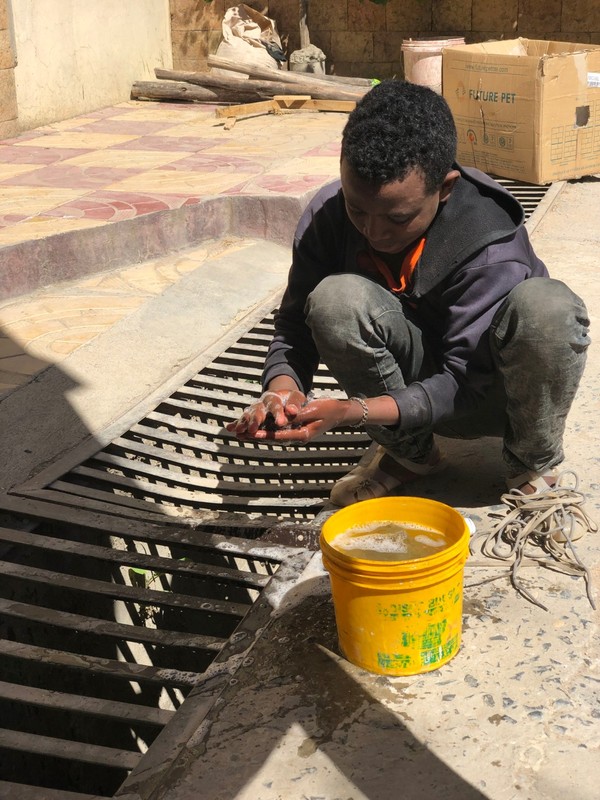 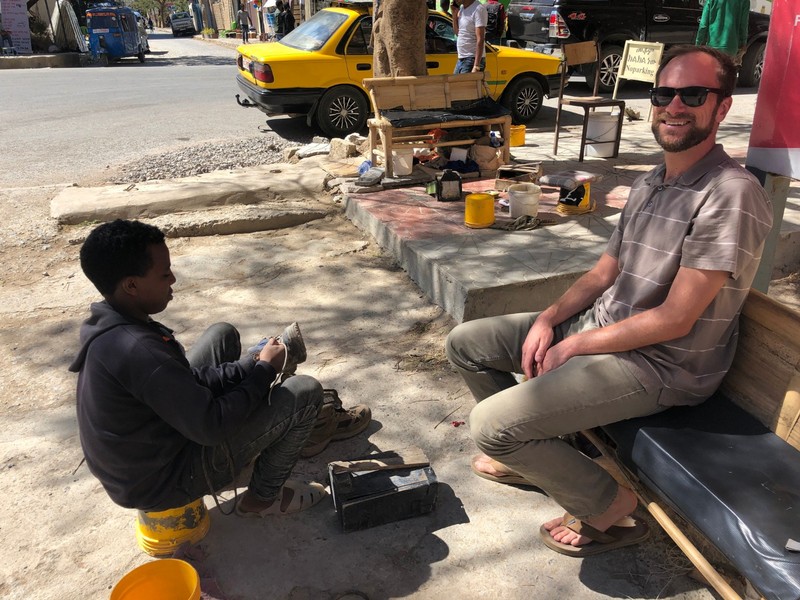 Next we decided what better way to ring in the new year than with a massage. We found the spa recommended by someone at the guesthouse (one of Saba’s relatives, maybe). The workers brought us back to a small room with lockers and gave us each a towel and a mini bar of soap. But no instructions. We eventually figured out that we were supposed to shower. I put on the extra-large pair of men’s sandals that they provided (what was worse, that or the floor?) and slowly slid across the room to the showers, dragging each foot on the ground so the shoes didn’t fall off and so that I didn’t slip on the wet floor. The water was hot, which was a relief, but I think we both closed our eyes as much as possible to avoid looking at all the hairs leftover from previous clients. After the shower, they led us to neighboring rooms and began the massage. I don’t know what kind of oil they used, but it felt more like corn oil than massage oil. And my massage therapist was generous with it. She didn’t rub it on her own hands first either; instead, she squirted it directly on me. Overall, the massage was more of a oily rubdown, as not much pressure was used. But I guess that’s to be expected when you sign up for a $7 massage. We got another shower afterward, but it would’ve taken three showers to get all that oil off. 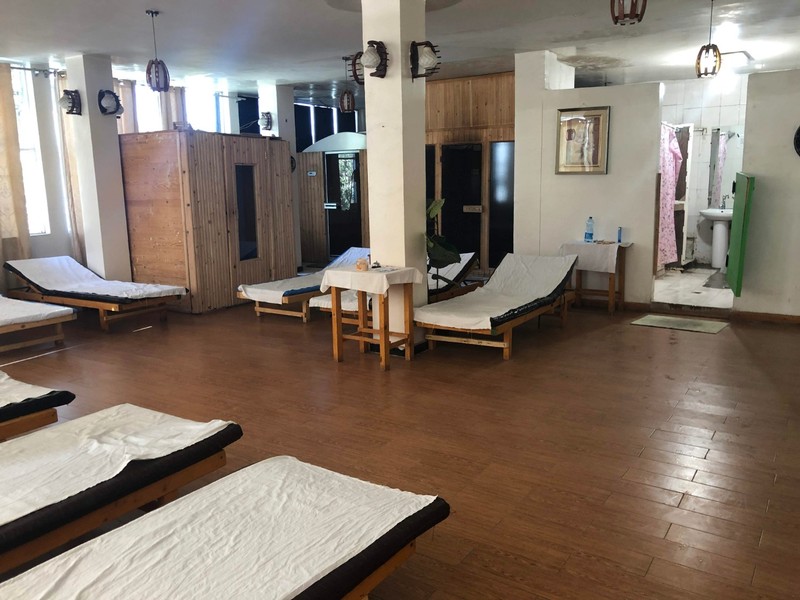 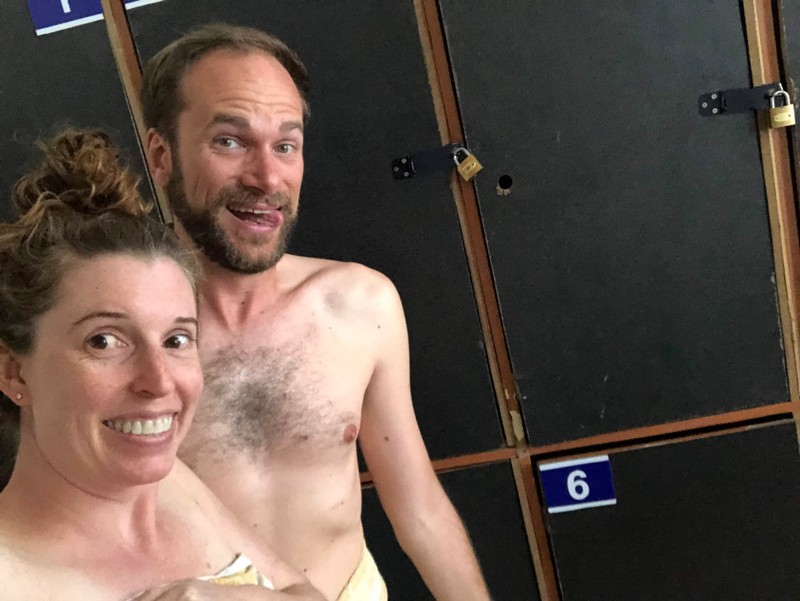 Wandering the streets on this crisp, sunny afternoon, we walked past several pool halls, coffee shops and milk bars. A woman on the street sold green bushels of something, and customers sat snacking on it. We didn’t know what it was, but we bought a bushel, took a seat with the locals, and started chewing. We had learned that Ethiopians chew khat, a plant that contains a stimulant that causes euphoria. Was this khat we were eating? We limited our intake, just in case. We found out later we were only chewing on chickpeas. 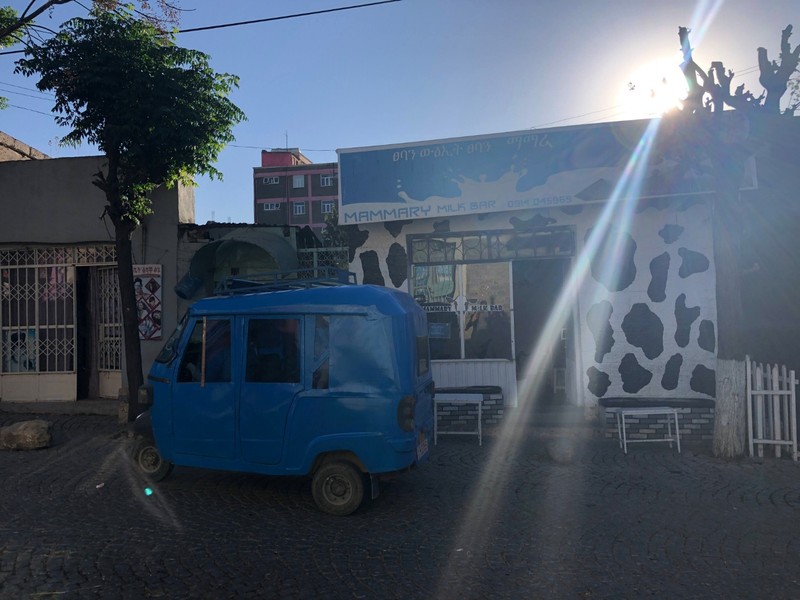 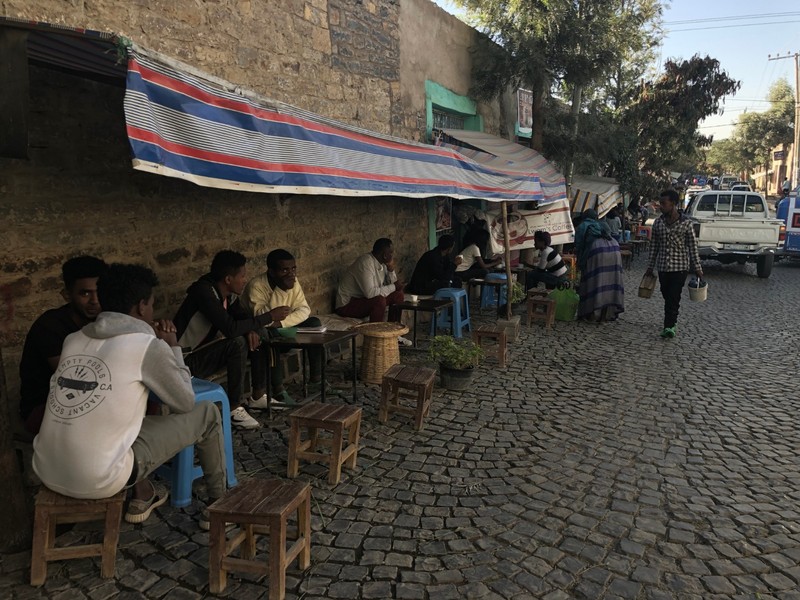 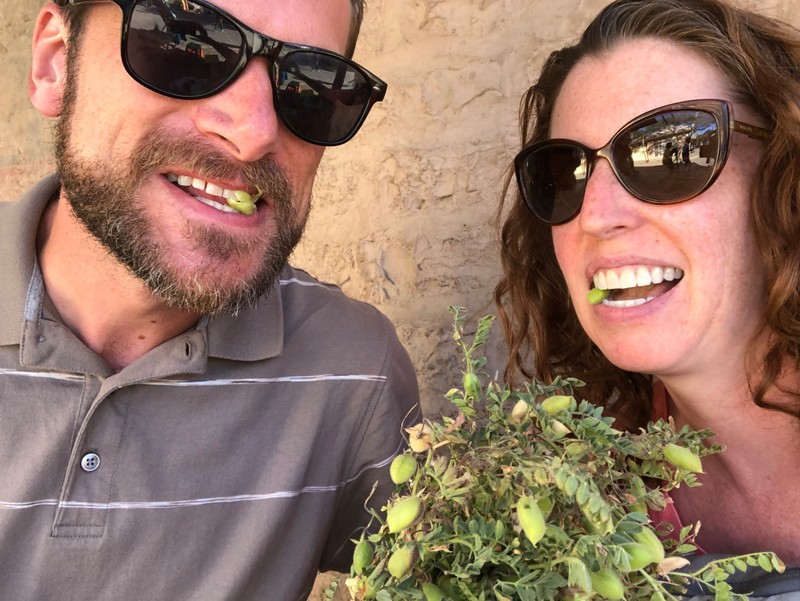 Dennis, a regular coffee drinker, had yet to try a real, solid cup of joe from the country where it originated. He had drunk coffee every day, but it had come from Chris and Saba’s house or was instant coffee on our tour. So, we stopped at one of the many coffee shops lining the street. The flavor was top notch. He regretted not trying it earlier. 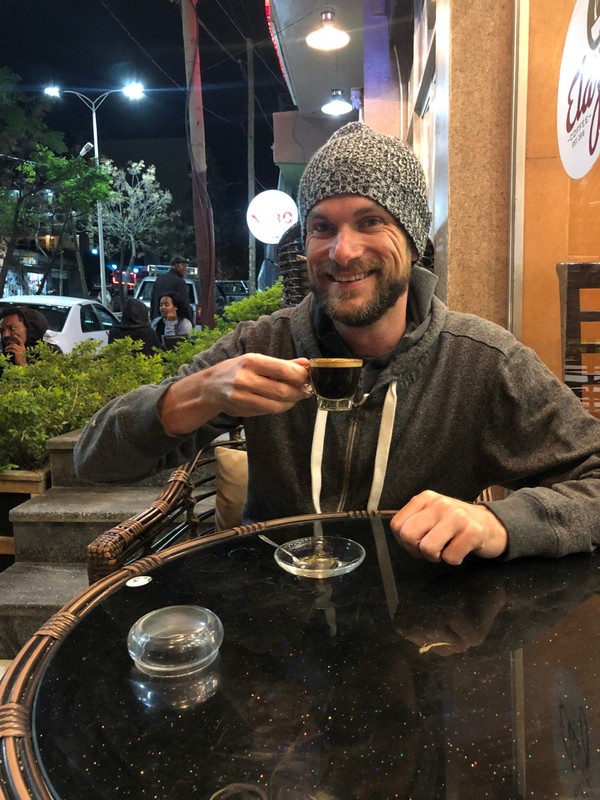 We savored our last traditional Ethiopian meal and our last night sleeping on a comfortable mattress before catching our flight the following morning. On the plane, we had a great view of a volcano shortly after takeoff. It wasn’t the one we climbed. Perhaps we’ll have to do this one next time. But between now and then, there are five more continuously active volcanoes in the world that we need to check out. 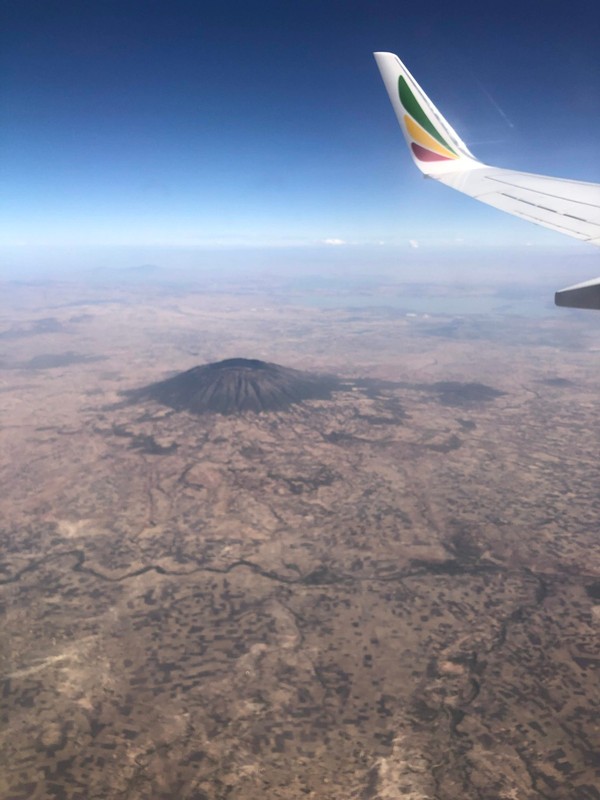 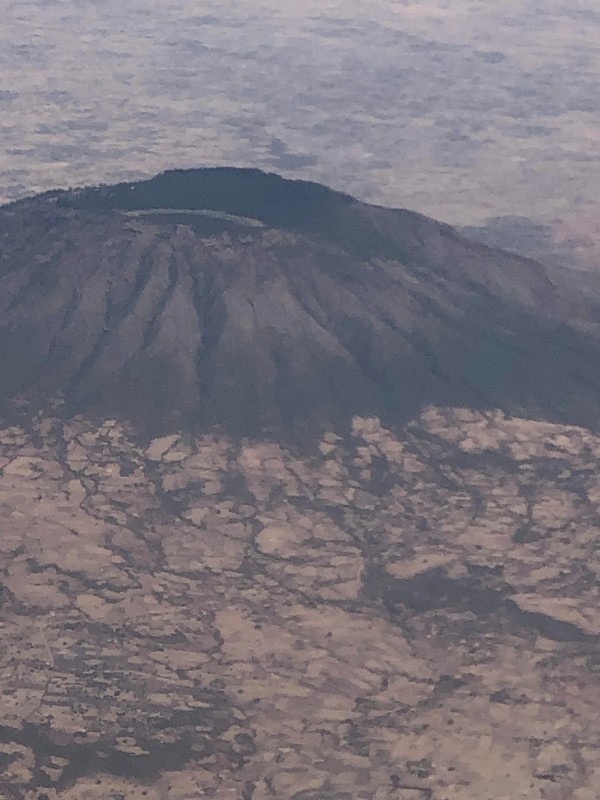 Posted by karenanddennis 01:00 Archived in Ethiopia

A shoe shine and massage...fancy! Good stuff, K-Mac. You should try some khat!

It is apparently big in Somalia too. I would always hear about the cops busting people for khat when I lived in Rochester, MN, which has a large Somali community. Hope you are having fun.